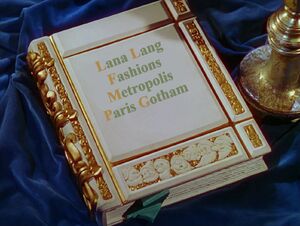 The animation was great, especially the quick running used a lot at the beginning in the Batman / Catwoman chase scene, and the falling animation used at the end of the episode. There was also some humorous moments, and some nicely done music (Catwoman's theme, Batman's theme when catching Catwoman from falling).

Overall, this wasn't the most amazing of all episodes, but it wasn't bad.

A well done conclusion to this two-parter with Batman and Robin finally teaming with Batgirl. Her involvement was not really needed, but it was a great introduction to the character. Most feel that three heroes is way too much, but the dialogue and situations with the three made it better than just Batman and Robin alone.

The animation was a notch better than last episode, but still not the greatest. There are some nice shots of Robin watching Mason, Batgirl appearing behind a subway, and Two-Face threatening Mason. They were well shaded, but this still won't make up for Batgirl / Barbara's miss-proportions.

In this episode, Two-Face was made out to be more of a gangster, which was great to see especially with the small portion of gangster fighting music during the subway station Tommy-gun fight. The music also paid small homage to the 1960's theme when Batman starts up the subway car which was nice to hear.

NOTE: Make 'Em Laugh occurs between Shadow of the Bat part 1 and part 2 because Robin is reading a news paper with Gordon's rally as the leading article. Strangely enough, Make 'Em Laugh episode #83 and does not occur in order.