Fairy Tales From The Wonderful World Of The Brothers Grimm 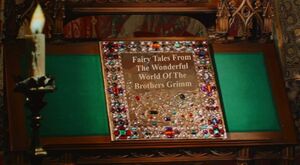 This was a very good episode. Denny O'Neil is a master at Batman stories, especially ones involving Ra's Al Ghul. This was an extremely good adaptation of the 70's Batman comic story with the same introduction to Ra's Al Ghul. The best moments were involving Batman and Ubu with the three strikes, Batman explanation to Ra's how he figured everything out, and the short parachute / skiing scene. The small opening scene before the titles was also very effective. For some reason, it was just very dramatic.

The animation was great as well, very dark and moody. Batman's outfit rarely had any grey in it; it was mostly black and dark, dark blue. There was some nice fighting too, with Batman and the thugs in the alley, Batman and the panther, and Batman's fight with Ra's men in the cave.

This was one of the greatest moments of Batman the Animated Series; the confrontation between Batman and Ra's Al Ghul. It is just so powerful; the animation, the backgrounds, the music, the dialogue. . . All of it is great!

One of the greatest speeches of the whole series was Ra's villainous plot speech to Batman towards the end, which is quite long, but very powerful. This whole episode, and the one prior to it, was a sort of a James Bond mission of Batman's, especially the ending with the satellite and the giant explosions rocking the countdown scene.

The music was also very well done, paying tribute to Lawrence of Arabia at one point. Another great piece was the triumphant swashbuckling music when Batman and Ra's were sword fighting. The whole episode was simply excellent to watch.