DuckTales The Movie Treasure Of The Lost Lamp

DuckTales The Movie Treasure Of The Lost Lamp
Edit This Page 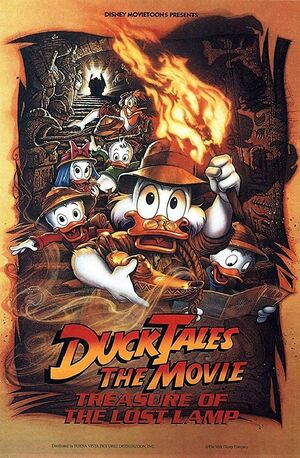 When I first watched this episode, I really enjoyed it. It was kind of goofy in places, but overall it was kind of fun. But when I watched it a second time, my opinion changed; it was a really dull, boring and pretty useless episode.

Sure, it showed us a new Supergirl costume, gave us some much needed exposure to Stargirl and STRIPES and we did get to see Metallo again. The rest felt like a retread of other shows though; I�m not one to enjoy �B.C.� type stories, with warrior men and crazy dinosaur riding lizard guys and I had my fill of it in a similar story from Teen Titans (�Cyborg the Barbarian�).

But let�s start with the positives. As I said before, we got to see a new Supergirl outfit which was much needed, especially if we ever want characters to actually age in the show. While the suits nice, I really don�t like her hair now. An odd complaint, I know�it just bothers me for some reason.

And Metallo! We actually got to see Metallo again with Malcolm McDowell voicing. It was a real treat to hear him again, especially since the only speaking appearance he had before was in Justice League's �Hereafter�, where Corey Burton voiced him. Metallo himself gave Supergirl a good walloping which was entertaining to see.

Stargirl and STRIPES were fun; I liked the character interaction between them. Stargirl seemed like the Supergirl we�d seen in STAS; the dislike that Stargirl had for Supergirl in the beginning was worth a chuckle or two, especially after we see there�s a Supergirl convention in Japan with lots of little girls running around in Supergirl outfits (her old one to boot!). I bet her new outfit was a hot conversation topic at the convention. The panels they must�ve had on it!

As for the actual story, apparently there�s a whole civilization at the center of the Earth. It hurts your head to think about it, so try not to scrutinize the existence of Skartaris. It�s there, League members were pulled down to help the heroes of Skartaris defend themselves against Demos and the Legion members Metallo and Silver Banshee, the League won and end of story.

The one beneficial aspect of this episode set up what I will assume to be the story-long arc. The Legion is attempting to take over and steal certain things; in Skartaris�s case, a giant Kryptonite stone that �heals� the people that go near it. Like I said�civilization in the center of the earth. Did I mention the sun? They have a sun too. Yeah.

The animation was extremely nice in this episode; everything was fluid with a few nice camera angles. Speaking of camera angles and animation, I feel the need to mention Kara�s hair again (no not to mention my dislike for it). There�s a part in her battle with Metallo where she comes down hard on a set of stairs and her hair just falls and lays over the step; I honestly don�t know why that stuck with me, but it was a really neat and fluid piece of animation.

The music was typical of the show; there were some neat cues here and there, but nothing that really popped out at me. It fit the story, so I guess that�s one of the higher compliments you can ever give musical scores.

Aside from the excellent opening (giant mutant Turtle�what�s not to love?), the rest of the episode pretty much bit. Silver Banshee sucking the life force from soldiers was entertaining, as was the Metallo/Supergirl fight, but aside from that, there really wasn�t much else here. In fact, you can almost completely skip it: the one element in this episode that mattered (Metallo shutting down when he was about to talk about the Legion) was referenced in �To Another Shore�, which was a much more enjoyable episode. Watch that one instead.

Addendum: After being emailed about the episode, I'd like to clarify that Travis Morgan (Warlord) is DC character that's as real as Green Lantern or Supergirl. The character goes back to the 70's for DC Comics and he had a series that ended around 1988 and had 133 issues. The society in the earths core is part of the DC Universe. In Feb 2006, DC is starting a new comic series for him.

Of course, this doesn't change my opinion of the character or episode at all, but I wanted to clarify that.

Scrooge McDuck, his dimwitted pilot Launch Pad, and his newphews Huey, Dewey and Louie, with Webby, arrive in Egypt where Scrooge finds the lost treasure of Collie Baba, unbeknownst to Scrooge, a magic lamp was included inside the treasure, so while the nephews have fun with the genie, they all have no idea that they’re being stalked by a power hungry sorceror named Murlock and his dimwitted thief counterpart, Dijon. :NC-17 – Adults Only