One Hundred and One Dalmatians

One Hundred and One Dalmatians
Edit This Page 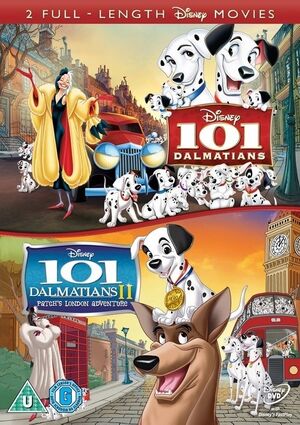 This episode is the first part of a 2-part story-featuring Daredevil, and is the best team up episode the series ever did. Whilst Daredevil didn't look as good here as he did over his Fantastic Four episode, I found this to be the better written of the two, with this Daredevil clearly being one of the post Frank Miller era. If any of you aren't Daredevil fans, I'd highly recommend picking up some of Miller's Daredevil books. It's the best stuff he's ever written, in my opinion. I find Born Again to be his best work ever.

I could go on all day about my own fan boy dream for a Daredevil animated series, but I�ll spare you. These episodes are quite clearly the best we�ll see for some time, unfortunatly. Given that the majority of cartoons are aimed at children and Daredevil isn't one of the kiddies favourites, he'll probably always be demoted to guest star status. A great shame, he's far more interesting than most of Marvel's superheros. As for this show, they did a pretty good job with him. A great voice and a pretty faithful translation of his origin makes this The Man Without Fear's greatest animated adaption yet. I couldn't help but be slightly dissapointed the likes of Foggy and Karen didn't appear, but this is Spidey's show.

The plot is something different for Spider-Man. As the title of the episode suggests, our hero has been framed for treason! In an unusual twist, both Peter Parker and Spider-Man were framed, thanks to The Chameleon. These episode had a large cast. No one really seemed too underdeveloped here, and I thought there was some great stuff with Terry Lee here. I found her to be a pretty cool character. As far as I'm aware, she was created for this TV show too.

The best part of the episode was Daredevil himself. He had a very badass design, which again, came as a surprise. Beyond the first season, someone in charge obviously lost the plot when it came to visuals. Most of the new designs weren't too pretty to the eye, the animation was inconsistant throughout each episodes, and the colouring made everything look dull and basically, it didn't pop on the screen, especially when compared to the first season's beautiful visuals.

Overall, this episode was one of the best the series had to offer, and started a string of very strong episodes from the third season.

This episode was a turning point in the series, as one of the main focus points of the show, the fact that Wilson Fisk is really The Kingpin, was finally revealed to Spider-Man. As cool as it was to finally see Spider-Man learn that Fisk was a criminal, none of The Kingpin that followed lived up to the previous ones. With his identity known, The Kingpin just wasn't as much fun anymore. Not to say he was a bad character, he was just a shade below his usual self after this.

As with part one, this episode was an excellent offering. Featuring nice animation and some very good music, the episode kicked the arc into high gear, and teased the fans by showing The Kingpin apprehended. I remember being shocked watching it when I was a kid, and then being surprised it was actually The Chameleon. One of the weirder things I find about this show was that Kingpin never actually got caught. True, he was apprehended in the final episode, but that wasn't our Kingpin, that was the Armoured Spider-Man's Kingpin. In an ironic twist, that version was actually a lawyer!

There was something about Daredevil�s presentation in the show that stood above all the other guest appearances. Maybe someone was trying to push for a Daredevil spin off, but it is obvious more effort went into Daredevil than The Punisher, Dr. Strange and Blade. It may have been the fact Daredevil fit into Spider-Man�s world easier than the aforementioned, and was easier to get by the censors. egardless, truly a fantastic episode, and I�m deeply disappointed the proposed spin off never appeared. Hopefully, one day, we'll get to see Daredevil animated again!