Back To The Future

Back To The Future
Edit This Page 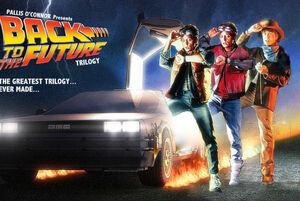 On a dark and stormy night, Batman patrols the skies above Gotham. Max is on the radio link with him as he studies for a history test. "Ford, Carter, Reagan, Bush, Clinton..." he mumbles. After Max cracks a joke about Clinton being the fun one, a vehicle is struck by lightning and crashes towards the ground. Batman rescues it easily, and the occupants are a large man, a woman, and a small girl. The people assure him that they're okay, and head off.

The next day at school, Terry sees the same girl enter his classroom during the test. She tells him that she refuses to go and needs his help. Strangely, no one else can see her. Terry makes a fool of himself responding to her, but she finally vanishes. Later, Terry explains this to Bruce, and he is quite puzzled. Then in the Batcave, the girl once again appears in front of Terry. "Talk to her," Bruce tells him. The girl somehow produces an image of a hotel room, while the same man and woman from the night before. Terry notices stitched lettering on a sofa. The man notices that the girl is doing something and begins heading towards her. Terry moves towards him, and the vision disappears. The letters-- G.P.T., stand for Gotham Park Towers, and Batman is off.

The rest of the episode mainly focuses on Terry's search for the young girl. Terry and Max pull a "couple" trick to slip into the hotel, where he manages to find out the room number. He encounters the large man and throws him out the window, but amazingly after a multi-story fall, he gets up and simply walks away.

Bruce is able to scan Terry's memories to ID the girl, who was reported missing earlier. Terry also has a chat with the parents of the girl, who reveal that she has special telepathic abilities, and she was supposed to have been sent to a school for the gifted. It was all a lie though, and she was really kidnaped by an organization called the Brain Trust. It's a secretive society based somewhere in Europe, and they set up a fake school to lure children away from their parents and into their evil hands. From then on it's a race against time to save the girl from those who want to take her away.

So what was good about the ep? A lot. I really enjoyed this one more than the last few episodes like Once Burned and Rats. The paranormal angle was relatively fresh, and the action scenes were very well done, although they're really intense in this one. Watch it and you'll see what I mean. Plus, some of the scenes were actually pretty creepy in an X-Files sort of way, such as Batman's battle with a telekenetic villain. This ep didn't suffer from a rushed pace either, thanks to scenes with the missing girl's parents and Terry's search of the school. Max was actually well integrated into this episode, although her on screen appearance is again limited and still doesn't know who the man behind Terry is.

Also, I believe an subtle message about the problem of missing kids was thrown in. While Bruce scan's Terry's mind, Terry says "I can't believe all these kids are missing." Bruce replies, "Believe it." Additionally, Terry takes the time to watch over his little brother as he sleeps at home for just a bit before he heads off to rescue the girl.

While the ep concludes nicely, the possibility of further conflicts with the Brain Trust remains open. This season has introduced a number of potential returners, such as the female government agent from "Joyride" and Mad Stan from "Rats". The true powers behind the Trust are never revealed, and I'd like to see Terry tangle with them someday. Overall, great episode.