The Phantom of the Opera

The Phantom of the Opera
Edit This Page 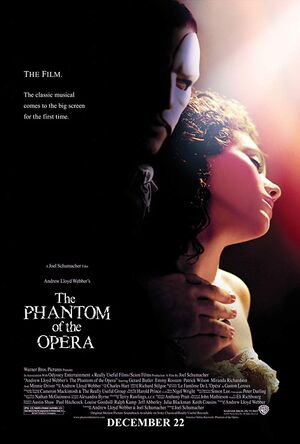 A mysterious vandal is plaguing Hamilton Hill High School. The students think the vandal is the ghost of a dead student, Garrison Jacobs. Terry sees the vandalism and an attack on several students, including Dana, Chelsea, and especially, Nelson Nash. Later, in the Batcave, Terry is skeptical about the ghost. Bruce has witnessed the supernatural, but isn't convinced in this case. After another ghostly incident, Terry connects all the attacks to one suspect, Willie Watt. Terry and Batman both go after Willie.

This episode reminds me of the villain-first-appearance stories from the Batman series. Most of these stories were shown in two parts. The first part sets up the situation that creates the villain or his special abilities and then the second part shows the villain committing crimes with his new m.o. (modus operandi or method of operation). REVENANT is Willie's second part, m.o. episode.

� REVENANT is a good, dual meaning title. The ghost seemingly returns from the afterlife and Willie Watt returns from a long absence.

� Terry exhibits some detective skills in this episode when he deduces that the vandalism and attacks are targeting specific people and connects all the incidents to Willie Watt.

� Bruce appears for one scene in this episode and gets some good lines. "I've seen it all, demons, witch boys, immortals, zombies. But this thing, I don't know, it feels so...so high school."

� Terry also gets some good lines. After the shower scene, Terry wonders, "An invisible boy in the girls' shower, why didn't I think of that?" Later, when Commissioner Barbara Gordon closes the school down temporarily, Terry speaks to her and says, "You're a hero to my people".

� Terry cleverly tricks Willie into revealing his psychic powers and admitting to the school vandalism.

� Willie is still isolated and ignored by his family, but he is no longer a scrawny misfit. Now he is a muscular, bullying misfit with strong telekinetic powers and reason to dislike Terry and Batman. Future Willie stories should prove interesting.

� As a secondary story, Terry's brother Matt misses his father and even wishes he could contact his father's ghost so that he won't forget him. At the episode end, Terry and Matt spend some time together reminiscing.

� While the animation is good, one scene has a small mistake. In the very wet shower scene, the girls are soaked and have dripping wet hair. However, when they run out of the shower room, their hair is completely dry and styled!

� When Terry goes to Juvenile Hall, he alludes to the fact that he's been there. Come on writers, tell that story!

� Yet again, Terry is armed with some type of weapon to capture a villain, but the weapon only has one dose or projectile. Can't the Batbelt carry extras?

� Since Terry spoiled Willie's future plans, why didn't Willie go after Terry instead of Nelson at the end?